Plenty of Americans continue to work after hitting retirement age. Data from the Census Bureau shows that in 2015, 12% of Americans over the age of 70 admitted to doing some work in the previous 12 months. Maybe you’re the type of retiree who wants to stay busy during retirement by working, or you want to supplement your retirement savings. But how do you decide where to settle down? Below we rank the best places for a worktirement.

In order to find the best cities for a worktirement, we looked at data on 389 cities. We analyzed factors like unemployment rate, tax rate, number of medical centers, retirement centers and recreation centers, seniors as a percent of the population, median housing costs and more. Check out our data and methodology section below for more information on where we got our data and how we used it to create our rankings.

This is SmartAsset’s third annual study of the best cities for a worktirement. Check out the 2016 rankings here. 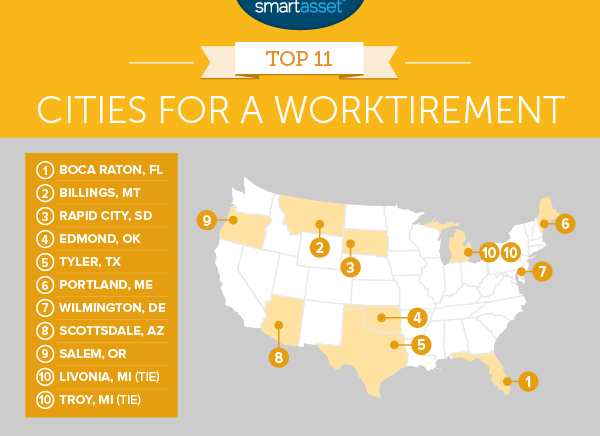 Boca Raton sits at the southern end of Palm Beach County Florida. This city is great for seniors who want to have a good time, and earn some extra cash on the side, as well. Our data shows that Boca Raton has the fourth-most recreation centers per 1,000 residents and the third-highest percent of residents who are seniors in the study. This means there are plenty of opportunities for socializing and recreation.

Seniors who do decide to work here are also well compensated. Data from the Census Bureau shows that in homes where the head of household is over 65 years old, the median household income is about $68,000.

One concern if you are thinking about retiring here, is that Boca Raton has some of the most expensive housing costs in the study. The median housing costs over $18,000 per year.

But Billings has its drawbacks. Seniors here don’t earn much on average. Households where the head of household is over 64 earn only $39,400 per year, almost half of what they earn in Boca Raton. Medical centers are also relatively sparse with only 1.6 medical centers per 1,000 people, the lowest rate in the top 10.

Rapid City is the first Midwest city to crack our top 10. The best thing about a worktirement here is the Rapid City’s low retirement tax rates. For the most part, you keep what you earn in Rapid City. The effective tax rate is only 14.2%. Unfortunately, seniors here may not be earning that much. Data on incomes for households where the head of household is over 64 shows that they only earn an average of $41,000 per year. That figure ranks 184th in the study, which is below average.

But Rapid City can also be fun place for seniors. Our data shows that about 15.6% of Rapid City residents are seniors, meaning plenty of opportunities to make friends. Plus, Rapid City also has the 16th-highest rate of recreation centers per 1,000 residents at 1.38. This means there shouldn’t be any lines for your favorite activities.

As you get older, you may find yourself using medical facilities more frequently. That means it’s important for retirees to have access to those facilities in their cities. This is where Edmond shines. Edmond has the fourth-most medical facilities per 1,000 residents in our top 10.

Plus, living here won’t break your retirement savings account either. Our data shows that average housing costs in Tyler eat up about $10,000 per year. That’s the lowest of any city in our top 10.

Located in southern Maine, Portland is the New England’s sole representative in our top 10. For seniors who want to work just to stay busy, Portland may be a great option. Work here, according to Census data, is not hard to find for seniors. Seniors in Portland have an unemployment rate of 0.8%.

However, the work available in Portland may not be very lucrative. Our data shows that households where the head of household is 65 or older earn only $38,600 on average. That figure is below average in the nation and ranks 236th overall.

If you’re considering working in retirement and want to keep your taxes low, Wilmington is the place to be. Wilmington has an effective retirement tax rate of only 9.4%. That’s the second-lowest in the country. Our data suggests that Wilmington is also a good place to have some fun, while keeping an eye on your health. This city has the eighth-highest rate of medical centers per 1,000 residents and the third-highest rate of recreation centers in the country.

Of course, Wilmington has some drawbacks. The unemployment rate is relatively high at 5.9%. And households led by seniors earn around $28,000 per year, one of the lowest amounts in the country.

Scottsdale is one of the most popular destination for retirees, so it’s no surprise to see it cracking the top 10 for best places to have a worktirement. This Phoenix-area suburb rises up the ranks thanks to top 30 scores in five metrics.

Oregon’s capital takes our ninth spot. Just about 12.6% of the population here is 65 or older. This city combines the fifth-lowest effective retirement tax rate and the fourth-highest number of retirement communities to make for a great place for a worktirement.

Our list finishes with a tie between two Michigan cities. Up first is Livonia. Livonia is more retirement focused than Troy, the city with which it is tied. This city has more retirement centers per 1,000 residents and a larger share of its residents are retirees (18.1%).  Livonia has an overall unemployment rate of 4.6% the 60th-lowest in the country.

Troy is one of the best options in the country for seniors who want to keep working. This city has an overall unemployment rate of 3.6% (the 15th-lowest in the study) and a senior unemployment rate of 0.7% (the eighth-lowest in the study). The median household income for households led by seniors in Troy is over $50,000 per year, which is above average.

However much of that income will be going to housing. Our data shows that Troy has some of the highest annual housing costs in the study at $14,196 per year. 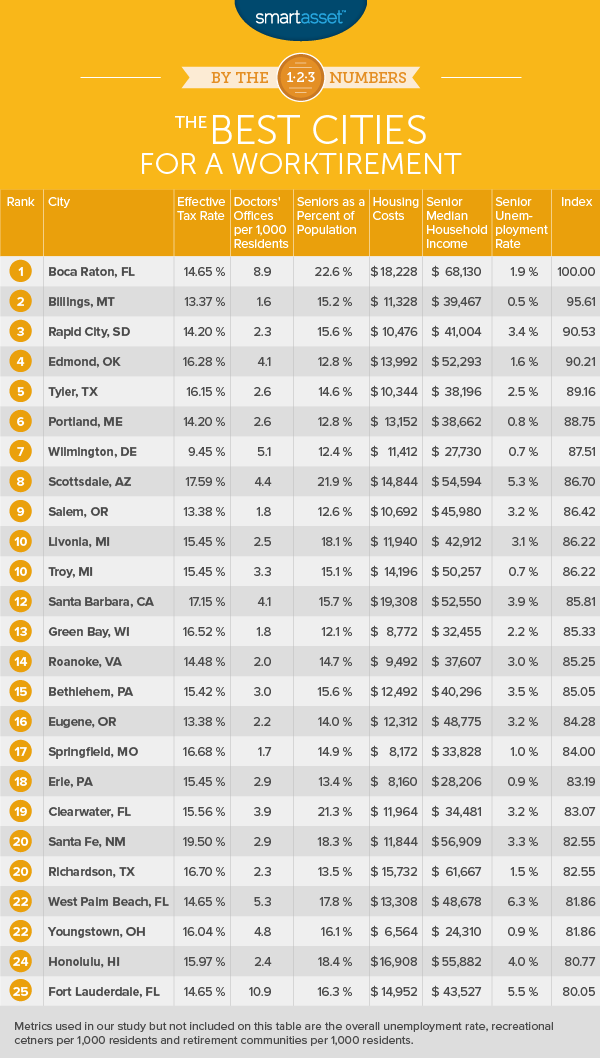 Tips on Saving for Retirement

Saving for retirement can be a daunting task. Here are some tips to make sure your retirement savings keep you going into your golden years.

Start contributing to an IRA as soon as you enter the work force. If you’ve been in the work force for a few years and having started contributing yet, don’t despair. It’s not too late, but you should start doing so as soon as possible. If you have the opportunity to enroll in an employer-sponsored 401(k), do so. If not, you can open an individual retirement account.

Depending on your earning profile a Roth IRA or traditional IRA may make sense for you. A Roth IRA is funded by after-tax dollars, meaning you can withdraw the money in retirement without worrying about paying taxes because you’ve already done so. People often opt for a Roth IRA because they think they will be in a higher tax bracket come retirement time than they are now. With a traditional IRA, you use pre-tax dollars, meaning contributing to it will decrease your tax bite now but you’ll have to pay taxes when you withdraw the money in retirement.

Nick Wallace completed the data analysis for this study.

Zehnder’s Snowfest has been host to one of the top snow and ice sculpting events in North America for the past 31 years. Visitors have enjoyed larger-than-life snow sculptures and beautifully detailed ice carvings each year.

CES® is the most influential tech event in the world — the proving ground for breakthrough technologies and global innovators.

Attendees will experience new technologies from global brands, hear about the future of technology from thought leaders and collaborate face-to-face with other attendees. The show will highlight how innovations in sustainability, transportation and mobility, digital health, the metaverse and more are addressing the world’s greatest challenges.

Visit CES.tech for all CES 2023 updates, registration details and the media page for all press resources.

The Fremont Street Experience in downtown Las Vegas invites you to these concerts: