Millions of American families struggle to pay mortgage payments. According to U.S. Census Bureau data, nearly 7 million American households were severely housing cost-burdened in 2016, meaning they spent over 50% of their income on housing costs. When households spend so much on housing not only are they less able to afford day-to-day expenses but they are also unable to hit financial milestones, like saving for retirement or investing with a financial advisor.

What Does It Mean to Be Housing Cost-Burdened? 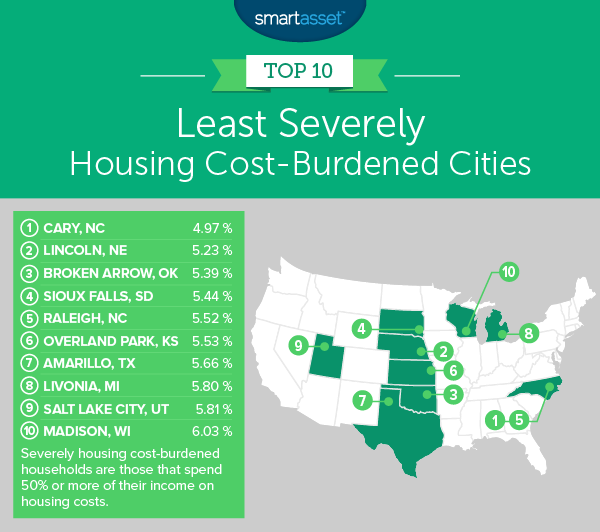 Combined that’s just over 16% of households in Broken Arrow who spend at least 30% of their income on housing.

In previous analyses of severely housing cost-burdened cities, Sioux Falls ranked well. In this version there has been a slight uptick in the prevalence of homeowners spending over 50% of their income on housing but not by much. According to U.S. Census Bureau data, just over 5.4%, or about one in 20, households are severely housing cost-burdened.

One factor increasing the housing cost burden on Sioux Falls households is the property tax rate. According to our research South Dakota’s property taxes are relatively high.

Only 5.5% of homeowners in Raleigh are severely housing cost-burdened. A further 11% spend between 30% and 50% of their income on housing. In total, that means roughly 16.4% of households here are housing cost-burdened, putting it right in line with Broken Arrow, Oklahoma.

Only 16.4% of homes being housing cost-burdened is great news for the city. It should leave residents in the area with savings to plan for their retirement.

Overland Park is such a great place to be a homeowner even millennials are buying homes here. With the help of Census Bureau data, we estimate that just over 5.5% of homeowners in Overland Park are severely housing cost-burdened.

Conditions are especially good for those earning over $50,000 per year. According to our data, less than 3% of households earning between $50,000 and $74,999 are severely housing cost-burdened.

Amarillo, Texas take seventh in this top 10. There is very little separating Amarillo from the cities ranked just above it and just below. Overall, we estimate that 5.66% of households here are severely housing cost-burdened, putting it 0.14% ahead of Livonia, Michigan in eighth and 0.13% below Overland Park, Kansas in sixth.

Long-term homeowners may not get much relief when it comes to paying property taxes. According to our research, Michigan has the ninth-highest property taxes in the country.

Tips for Finding a Home You Can Afford

Zehnder’s Snowfest has been host to one of the top snow and ice sculpting events in North America for the past 31 years. Visitors have enjoyed larger-than-life snow sculptures and beautifully detailed ice carvings each year.

CES® is the most influential tech event in the world — the proving ground for breakthrough technologies and global innovators.

Attendees will experience new technologies from global brands, hear about the future of technology from thought leaders and collaborate face-to-face with other attendees. The show will highlight how innovations in sustainability, transportation and mobility, digital health, the metaverse and more are addressing the world’s greatest challenges.

Visit CES.tech for all CES 2023 updates, registration details and the media page for all press resources.

The Fremont Street Experience in downtown Las Vegas invites you to these concerts: